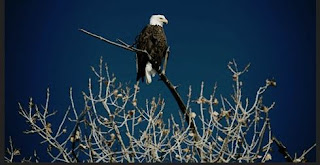 "You know I was talking to my friend about the
Endangered Species Act just the other day and how it has helped us eagles escape extension but then I found out this morning that some deplorable hunter shot and killed my friend just yesterday just so my friend could become a trophy."

"Why just this week deplorables all over the country were up in arms about some Hollywood movie called, The Hunt, in which rich hunters used deplorables for game but in the movie the deplorables fought back and killed the hunters."

"Sadly we Eagles and most other animals on the Endangered Species List can't kill deplorable hunters. What is it with humans?"

"It's not that I've got anything against hunting. We eagles hunt most every day. But you won't see any trophies on an eagle's nest. We hunt for food. And had my friend gotten eaten by some coyote I'd at least know he died so the coyote could live."

"I'd rather be with my friend, talking about all the silly things people like we used to do but instead I'm sitting here on this limb all alone missing my friend while some president in Washington says movies about killing deplorables are bad but deplorable hunters killing us eagles is a okay."

Get the best of Two Eagles Talking straight from the roost, right here at Wackemall.com.  That is, until all the talking eagles are gone.
at August 12, 2019

The God Car Will it start? Will anyone care? Will they come rushing out to see what is there? Will it make any difference? Will anyone know...