Sometimes I Say Exactly What I Think

Some years ago I was delivering the 3rd tractor-trailer load of decorative paver blocks to a new lakefront mansion on Lake Norman. There were dozens of young Hispanic workers busting ass everywhere as lots of new homes were being built there.

As I waited for the fork lift operator to finish the truck in front of me a new Benz drove up and a man in his 60s got out along with a very stunning 20 something female, "Oh Honey," she exclaimed, "It's going to be beautiful. Do you think I could go inside?"

"Sure," he said, "the inside is almost finished. I'm going to try to find the contractor."

He was walking my way and being the sort who will strike up a conversation with anyone I asked," Is this your house?"

"Yes it is," he answered. "Having it custom built just for the wife."

"Must be nice to have that kind of cash," I said.

"I'm in the Internet business," he answered.

"So let me get this straight," I teased, "if the economy goes to hell that young wife is going to ditch your ass and 4 families of Mexicans will end up living in this house you just blew your wad to make the down payment on. Is that about right?"

I'll never forget the look on his face. He never said a word.

Most people think they would rather be a hammer than a nail, but a nail only takes one beating.
at May 30, 2019

No Matter Where You Stand

Found the following ad on Craigslist so I decided to save it to the Lost and Found. Feel free to claim it, just don't expect to get it back. 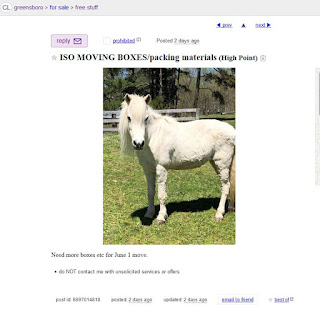 Email ThisBlogThis!Share to TwitterShare to FacebookShare to Pinterest
Labels: Lost and Found

It's Always About The Money


Funny how behind every "progressive/socialist "paradise" there's a conservative getting fucking rich; rank and file conservatives are too stupid to know it, and liberal leaders won't admit it.
at May 24, 2019

You Can't See Me

There's a plant that grows wild locally, Jimson weed, a hallucinogen that was very popular when I was a teenager because it was free for the picking. What is now Greensboro's Bryan Park was covered in hundreds of acres of free Jimson weed during and just after my teens.

I'll never forget this one kid I used to run with who after consuming quite a bit of the seeds, hiding behind a single stem with absolute certainty that no one could see him.

A dozen of us stood there laughing at him and he never figured it out.

Not long thereafter a classmate died from eating Jimson seeds.

And They'll Call You Lazy When You Refuse

It's hard work carrying water up stream a bucket at a time and pouring it back into the same creek you got it from but what have you accomplished when you're done?
at May 19, 2019

I was driving my pick-up south on Martin Luther King a few days ago when suddenly I noticed a car in the left lane stopping quickly and apparently for no reason.
I instinctively stopped just in time to see a child, a little boy, run out from in front of the car and right in front of my truck so small and so close that he disappeared then reappeared as he ran into the parking lot at the tire store.
My heart almost stopped beating.
The cars behind us both were still coming to a screeching halt when I looked over at the young Hispanic man driving the car to my left. He gave me a thumbs up, I nodded and smiled, and we continued on our ways.
Like I said, this was instinctive for me as I didn't see the child in time to stop. Had I been relying entirely on the threats I could see I would have run over that little boy before I hit the brakes.
This was instinctive for me because of training and experience that most drivers never get. I'm not immune to accidents but 28 years and 3 million miles of training, trucking experience, and training others to drive saved that child's life.
This time.
I only hope that by reading and sharing this that some of you have learned that the threats can't always be seen, and that the next time a child darts across a busy street that you are able to act instinctively.

The Murder Of Adam Wiser

"But you took the time to walk inside your home and come back out with your gun instead of calling the police," the judge interrupted. "That makes your actions premeditated."

"I reckon they were," Leo replied. "It ain't like I shot the thief by accident."

"For a few groceries?" the judge questioned.

"So why did you shoot him?" the judge asked.

"Cause the psychopath sum of a bitch laughed and me and made fun of me when he took 'em," Leo explained.

"Do you shoot everyone who makes fun of you, Mr Stori?"

"So why have you never shot anyone before?" the judge asked.

"I kinda figure," Leo explained, "that any man who would steal from you then hang around and and laugh and make fun of you is the sick kind of person who is just going to do worse things to other people in the future."

"So you decided to become proactive and take the law into your own hands."

"I reckon I did," Leo admitted.

"Do you regret having shot the victim, Adam Wiser?" the judge asked.

"I only regret that I'm a lousy shot and didn't kill him," Leo proclaimed. "I never could hit the broad side of a barn when I was shooting hand guns."

Adam Wiser had already been released from 30 days in jail having been sentenced to time served. As Leo had predicted Mr Wiser would go on to commit crime after crime until finally a conviction for the brutal rape and murder of a 13 year old girl landed him in prison 5 years later where Leo Stori who had been sentenced to 10 years for attempted murder in the first degree, was there waiting on Adam Wiser to arrive.

Less than a week after having arrived at the prison, Adam Wiser was found tied to his bunk, his body having been slowly and painfully bled to death by hundreds of small cuts. They were never able to prove who killed Adam Wiser so Leo Stori was released after just 6 years as a model prisoner.
at May 13, 2019

Every attempt at cleaning begins with creating a bigger mess.
at May 06, 2019

Anti-intellectualism is defined as "hostility towards and mistrust of intellect, intellectuals, and intellectual pursuits, usually expressed as the derision of education, philosophy, literature, art, and science, as impractical and contemptible."

But might it be true that  Anti-intellectualism was brought on and continues to thrive today because so many intellectuals have long allied themselves with mindless elites in efforts to better themselves without regards as to what happens to those they leave behind?

When intellectuals lead us no one objects to their presence-- when they push us they become just like the elites.