The Goat Ate The Letter

Every morning on the school bus Anthony would tell us how he milked his mother twice a day before and after school. Most of us had never seen a cow so we assumed Anthony was making crude talk about a woman until the day he told us the bull had decided he wasn't happy about Anthony milking the cow and chased Anthony from the barn. It was then Anthony told us he had a new mother who was a goat.

In time the talk got back to the Teacher who decided it would be best if she had the Principal deal with the issue. In those days lots of homes didn't yet have telephones so the Principal gave Anthony a letter and told him to give the letter to his mother as it was well known that Anthony's father had died several years before.

After several days with no response from Anthony's mother the principal called Anthony to his office. "Anthony," the Principal asked, "Did you give that note to your mother like I told you to do."

"Did she read it?" the Principal asked.

"Why not?" the Principal asked.

"Because she ate it," Anthony answered. "Momma eats everything."

After school that day, instead of boarding the bus, Anthony was given a ride home by the Principal. When they arrived the Principal saw a cow and a bull in the field and a goat in the yard. "Momma!" Anthony shouted as he ran to the goat and hugged it, "We've got company. I can't remember the last time we had company, can you?"

The Principal searched the entire property and found no other humans there other than Anthony and himself. Then he noticed a mound in the flower garden that seemed rather suspect. "Anthony," he asked, "can you tell me what that mound is over there in the flower garden?"

That which is of no benefit, and is detrimental to society as a whole, no matter the intention.While not subject to society's ever changing moral standards.
at June 29, 2018

Email ThisBlogThis!Share to TwitterShare to FacebookShare to Pinterest
Labels: Dictionary

So now I wait, the phone to my ear
wondering what comes next.
Will she continue to talk to me?
Why isn't she saying anything?
"Hello," I ask, "are you still there?"
No one answers.
Will she call me again?

Maybe Rachel will call to talk about my credit card account.
at June 28, 2018

Email ThisBlogThis!Share to TwitterShare to FacebookShare to Pinterest
Labels: Poetry 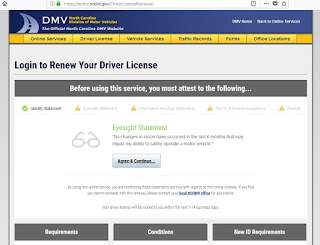 As seen in the photo taken from the NCDMV website, drivers seeking to renew their drivers licenses are asked an "Eyesight Statement" that reads, "No changes in vision have occurred in the last 6 months that may impair my ability to safely operate a motor vehicle." but nowhere in the online process are they asked to verify if they are actually sighted.

As North Carolina drivers licenses are issued for eight year periods this allows seven and one half years for drivers to go blind and not report their blindness to the NCDMV before renewing their Licenses online.

Wackemall Network News staff attempted to contact the NCDMV concerning this issue but as it is a Saturday our calls went unanswered.
at June 23, 2018

Email ThisBlogThis!Share to TwitterShare to FacebookShare to Pinterest
Labels: News

As infants they were separated from their parents. At first they were the children of illegal immigrants, Hispanics mostly, caught crossing the border from Mexico, thousands of them rounded up and presumed lost in an overloaded child care system that was unable to keep up with their whereabouts or the whereabouts of their parents who awaited their return just across the border in Mexico.

Later, after the border wall was built, the smoke blew over, and things calmed down more would trickle in, victims of hurricanes, tornadoes, and other disasters both natural and man made. These children were of every race with most of them being from poor families.

Eventually all abortions were declared illegal as the courts ruled that an embryo was alive from the moment of conception. The morning after pill was permanently banned, most insurance policies no longer covered birth control, and the cost of birth control-- even condoms-- rose so high that only the rich could afford to buy them. To prevent dangerous back alley abortions the government funded a program that would house and care for every unwanted child, no questions asked.

Newborn babies flooded the government by the thousands every year.

Foster homes were gradually phased out except for the older children who were orphaned. Any child believed too young to remember his or her parents would remain in government custody until adulthood. Adoptions of newborn babies were no longer allowed as there were more than enough older children in need of homes.

Sometimes newborns were simply stolen from hospitals and transferred into government care administered by employees of private corporations as the completion to Fascism continued. Everyone always just doing their jobs.

Babies were taken from anyone who committed any sort of a crime. Even a speeding ticket with a child in the car was considered child endangerment and reason enough to remove a baby from its parents. Any excuse that could be used to place a child in government custody would be used.

To ensure the quality of the stock of the babies they were raising, a breeding program was established. Young men and women of child bearing age could be well paid to produce babies for the government provided these young men and women tested well in an exhaustive battery of mental and physical tests only a few could master.

It took 25 years for the first class to graduate. They were physically healthy, well educated, well trained, knew how to do their jobs, followed orders well, successful, and voted for who they were told to vote for.

My Daddy and I used to haul roof trusses laying in stacks on their sides. Sometimes they would creep and get wider as we went up the road.

We left Greensboro at daybreak one morning on our way to Silver Springs, Maryland with two loads that measured 14' wide when we left. Daddy was in the front.

We knew Daddy's load had gotten wider as we had stopped and tightened down our loads twice before we got to Richmond, but we weren't sure how much wider. Our permit routed us up the Richmond-Petersburg Turnpike so that was how we had to go.

When we got to the first tollbooth we were both able to see that Daddy's load was not going to fit through the tollbooth. (Yes, once upon a time there were tollbooth on the Richmond-Petersburg Turnpike.) We turned on our 4 way flashers, set our brakes, and got out of our trucks to find someone in charge.

A Virginia State Trooper seemed to come from nowhere, jumped out of his car and started yelling at us as traffic was quickly backing up. We tried to tell him it wouldn't fit but he threatened to throw Daddy in jail if he didn't "Get back in that god damned truck and drive!"

Well now you know where I get my attitude from.

Daddy got back in the truck and knocked the tollbooth on the right down. Seems the Trooper had never looked at the right side which was sticking out farther that the left.

Things got real messy then.

The Trooper put Daddy in handcuffs and threatened to do the same to me. More Troopers came. Lots of them. They put us inside one of the buildings the Turnpike Authority used for offices while they stood outside the door, Troopers and Tollbooth workers screaming and yelling at each other for half an hour or so.

Finally an older Trooper showed up and they all got really quiet. He talked to them for a few minutes then came and talked with us. Then 2 Troopers escorted both our trucks to the Maryland state line as fast as we could run.

A brick is as thick as a brick, it must be,
and harder than you think when it hits your knee.
A stone, like bone when it cracks to break a leg
to fell you, and spell you, your attempt to drink a keg.

Conspired, you're mired in a mess of your own making,
a nightmare of a dream from which you wished your waking.
But tired, you aspired to never repeat your fate
knowing all along you'll soon participate....

Email ThisBlogThis!Share to TwitterShare to FacebookShare to Pinterest
Labels: Poetry 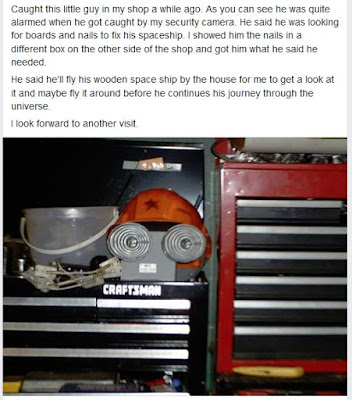 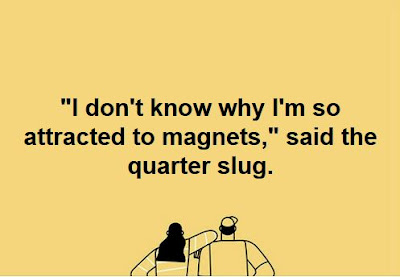 "Helps to know what you're made of."

Props and photo-ops, stolen valor, and greed. This is what my generation, the Baby Boomers, will be most remembered for.
at June 06, 2018

All the years I knew my Daddy he scoffed at the idea of life on any other planet always referring to the creation story in the Bible. But just a few weeks before he suddenly died he surprised me by saying he believed we couldn't be the only ones.
Enlightenment had come to him. He spoke of a lot of other truths as well over the course of the next few weeks. Things I'd always thought him too dumb or brainwashed by religion to understand. Things he had opposed previously. He didn't reject his religious beliefs, he rose above them intellectually. It was an amazing transformation.
Then, out of the blue he had a heart attack and died.
at June 01, 2018