I went out this morning early and pulled the weeds from my bed of Fennel. This is my first effort at growing Fennel so just getting it to come through the ground always seems like an accomplishment. I'm still waiting on the Lavender I planted the same day to pop up.
The Fennel still needs to be thinned to about 10" apart according to the seed pack. As it's a perennial I hope to grow in in the same place for years to come. Later, I'll fill the smaller plants on top with soil and plant something in them as well. 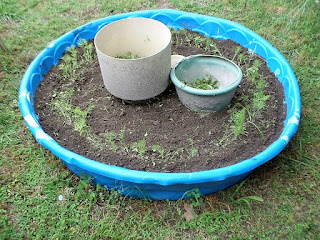 About the time I finished weeding a flock of crows landed on a telephone wire across the street behind where I was working. Noisy as crows always are I didn't pay them much mind as Panther was waiting nearby for something to land within her reach. Not that my little black cat is big enough to take down adult crows but she tries.
Thus the reason the crows stay across the street.
As I was walking away I heard someone repeatedly shouting, "Come here, come here, come here." in a bird like voice. Finally I turned to see who it was but all I could see was the crows on the telephone wire. "Come here, come here!" one of the crows shouted.

This time I was sure it was a crow talking to me so I walked across the street, looked up and the crow on the wire above me and asked, "What do you want?"

"I just wanted to know," the crow asked, "how far would you have been if I hadn't called you back?"

Email ThisBlogThis!Share to TwitterShare to FacebookShare to Pinterest
Labels: Comedy

A Forest Grows There

Greensboro, NC-- It began as a dream to build a downtown performing arts center to rival the Durham Performing Arts Center and revive Downtown Greensboro once and for all but after years of political ineptness and wasteful spending by those who placed themselves in charge of the project what was once destined to be the Steven Tanger Center for the Performing Arts is not being dubbed Robme's Folly. 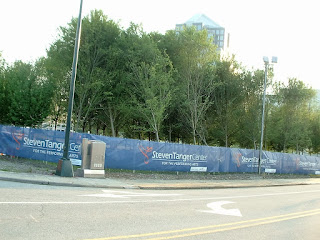 Trees now grow as a forest and fields reclaim what was once several city blocks of buildings and businesses all destroyed to make way for the dance hall that never came. So long has it been that soon the trees will obscure the view of Greensboro's tallest buildings.

The cranes with their wrecking balls and bulldozers were never followed by loads of cement and teams of illegal aliens to do the work of building what was to be the city's greatest gem in over half a century.

At a press conference earlier today, Greensboro Mayor Nancy Barakat Vaughan stood at the podium, swallowed several pills, drank from a glass of what was believed to be water, and then spoke into the microphone, "I don't know what to say," she cried, tears washing the layers of make-up down her plastic looking face, "We promoted it the best we could but the money never came."

Then she passed out and was rushed to Cone Hospital by Guilford County Emergency Medical Services who were already on standby at the event.

This edition of the the Wackemall Network News has been brought to you by the Campaign to Elect Billy Jones, Mayor of Greensboro 2017.
at May 26, 2016

Email ThisBlogThis!Share to TwitterShare to FacebookShare to Pinterest
Labels: News

I was at the 311 Flea Market Saturday morning selling little furry critters and birds when this attractive woman and her son, who looked to be about 3 years old, walked past. "Look," the mommy said pointing to our cage full of parakeets, "aren't they pretty?"
"Wow," the little boy shouted, "chicken nuggets!"
She quickly dragged him out of sight. The other vendors and I managed to hold our laughter until they were a few tables away.
at May 15, 2016