Rioting is the cost Capitalism must bear for failing to pay its own way.
Signed -Old Capitalist
at May 28, 2020

China Is Communist In Name Only

I'm really concerned that we have fallen so deep into this left vs right, Communist vs Democracy divide that the entire world has failed to see that 3 very evil Fascist regimes now rule the world... America, Russia, and China.

And either one is as bad as the others.

China is Communist in name only, Russia doesn't even conceal her Fascism, and these united states were never as far from united as they are today.

On May 22, 2020 I posted The Truth About Debunking And Fact Checking in which I pointed out how many so called fact checkers, aka, debunkers, operate outside the lines of what I believe to be legitimate fact checking.

On May 21, 2020 I posted an interview with Robert Kennedy Jr to my Facebook page. along with the comment, "Anyone want to actually fact check Robert Kennedy Jr." Yesterday, May 26, 2020,  I discovered some discrepancies and outright failures in Facebook fact checking. You see, it was yesterday that I received the following notice from Facebook. 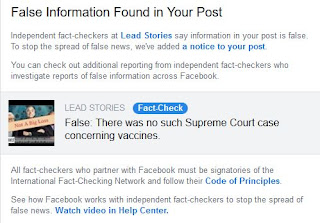 Now if you've ever gotten one of these notifications and clinked on the links from Facebook then you know their link to Lead Stories is not a link to a 3rd party website but in-fact a link to a Facebook landing page about misinformation.

Now I'm not going to argue that Kennedy is right or wrong but in this example what Facebook and LeadStories.com are calling fact checking is anything but. And here's the proof.

Do we really know that to be true?

In this case it wasn't true at all as the "debunker" Facebook chose, Alan Duke of LeadStories.com  did not address the same video as the video I had previously linked to on Facebook.

Nor did Mr Duke's comments address any of the other claims made by Mr Kennedy in the 2 hour and 19 minute interview with Patrick Bet-David titled, EXCLUSIVE INTERVIEW: Robert Kennedy Jr. Destroys Big Pharma, Fauci & Pro-Vaccine Movement.
Seriously, Alan Duke debunks some anonymous nutcase who claims to be in Georgia and Facebook uses that as the basis to debunk a different video altogether? And you fall for it? You're looking every bit as stupid as you claim the anti-vaxers to be.

But I don't want this conversation to be about anti-vaxers or Robert Kennedy Jr. If that is all you can think about then you've nothing of value to add to this conversation. This is about how we are being mislead by the so-called fact checkers and the social media platforms who claim to be doing something about the problem of fake news by creating more fake news. If this is the best they intend to do then at best all they are doing is adding to the confusion.

If this is not their best intention then I am afraid the end is near.

If you are really interested in fact checking and debunking then I hope you'll read my article. The Truth About Debunking And Fact Checking in which I explain how to recognize a job well done.

The Truth About Debunking And Fact Checking

In recent months I have noticed what appears to be an explosion of fact checking and debunking online in response to the fake news crisis that plagues the world. Many new debunking sites have sprung up, many of them no better than what we already had. And some of them far worse.

1. Debunking or fact checking anything by simply repeating claims others make about the topic is neither debunking nor fact checking. It's 'he said, she said' gossip, journalism at its worst. It's the kind of journalism the tabloids are best known for.

2. Cherry picking is not debunking. For several years I wrote a local political blog about the city in which I live. The most common practice of those "debunking" my work was to publicly cherry pick one small detail that I got wrong while outright refusing to address the rest of my claims publicly or privately. Years later people are learning I was right and the cherry picking came back to haunt those who did it. Cherry picking is common in even the most prominent efforts to debunk unpopular claims.


"Cherry picking, suppressing evidence, or the fallacy of incomplete evidence is the act of pointing to individual cases or data that seem to confirm a particular position while ignoring a significant portion of related and similar cases or data that may contradict that position. It is a kind of fallacy of selective attention, the most common example of which is the confirmation bias.[1][2] Cherry picking may be committed intentionally or unintentionally. This fallacy is a major problem in public debate."

3. Opinions are just that, opinions. Not facts. Check the source of the opinion. Does it come from a competitor? Might one competitor want another competitor to fail?

Of course you could argue that this entire article is simply opinion but all who read it are quite welcome to debunk or fact check anything I've written here.

3. Do many of the articles you read debunking a story appear as if they were written by the same person or group of people? Sometimes they are.

4. Don't take anything for granted. It has become common practice on many websites to link to their own pages as sources but you won't know they have done so unless you actually follow the link, and thus you assume they have linked to an independent 3rd party.

5. Another dirty trick used by some "debunkers" is to make the claim that something is posted to another website but those of us who actually take the time to follow the links often discover their claims to be false.

6. Quite often titles express the opposite of the truth printed in the article but since far too many of you never click through and read the actual articles you never know the truth.

7. If you automatically shout conspiracy theorist or quack every time certain names come up then you are part of the problem. There isn't anyone reading this who doesn't believe that there are some people who wish to manipulate the media to their own personal advantage and yet the first thing you do, without taking the time to learn anything about the topic at hand, is play into the hands of those who would manipulate the media by dismissing an unpopular opinion as conspiracy theory.

Speaking of conspiracy theories, as I previously wrote in What The Government Fears Most From Conspiracy Theorists:


"Most conspiracies are created after the fact with the only conspiracy being the cover-up. The King fears most, that you might learn what he didn't control. For it is in what cannot be controlled by the King that hides his greatest weaknesses."

Did you notice how I did that? There is no question that I am linking to my own work and not to a 3rd party. It's not just a matter of writing style, it's a matter of being honest. "Debunkers" who aren't using such practices are in-fact lying to you.

8. How do you know I'm not lying to you now? If you are still reading this article on Facebook and didn't click through then you can't check the hyperlinks to know if I'm telling the truth or not.

9. Because someone was previously wrong does not mean that someone is always wrong. As we say here in the Southland, "Even a blind squirrel finds a nut sometimes." Can I verify that blind squirrels do find nuts? No, but a simple Google search will verify that the expression is often used.

Did any of you not understand my last link was to a Google search?

10. Another common debunking ploy is to ask lots of different people who may or may not be experts in the field, questions about what was said then put together an article piecemeal. This reeks of picking and choosing which answers the debunker wanted to present to his or her audience.

11. Do the debunkers cite sources?

12. Are the sources themselves unbiased?

13. Are the debunkers unbiased? Who pays their bills?

14. Is the debunker selling books? About what? Are book sales the reason he or she is in the business of debunking? Having published a few books I know from experience that the first thing our publishers recommend is that we write to gain exposure.

15. I only want to know the truth. But when I read an article or watch a video I come away with questions. And if those who are "debunking" the article or video aren't addressing my questions then I can't help but wonder about those doing the debunking.

After all, the job of the media is to report the truth, answer our questions, not leave us with more questions than we started with. And if you can't do that then apparently you don't know the first definition of debunk.


"expose the falseness or hollowness of (a myth, idea, or belief)."

and are relying on the second, less credible definition:


"reduce the inflated reputation of (someone), especially by ridicule."

The Truth About Debunking And Fact Checking by Billy Jones is licensed under a Creative Commons Attribution 4.0 International License.
Based on a work at https://wackemall.blogspot.com/2020/05/the-truth-about-debunking-and-fact.html.
Permissions beyond the scope of this license may be available at http://www.wackemall.com.
at May 22, 2020

What The Government Fears Most From Conspiracy Theorists

Most conspiracies are created after the fact with the only conspiracy being the cover-up. The King fears most, that you might learn what he didn't control. For it is in what cannot be controlled by the King that hides his greatest weaknesses.
at May 18, 2020

Your Package Is Forever In Route

I ordered a bunch of stuff from Walmart over 6 weeks ago. It was all supposed to come via FedEx. Last week the last package, a gallon of truck bed liner, arrived in a dump truck.

A friend of mine who I hadn't seen in years saw a whole pile of packages fall out the back of a FedEx truck on McConnell Road just outside of Greensboro. He picked them all up and was delivering them to people out of the goodness of his heart.

The can is dented all to hell but it isn't leaking.

Just to see what they would say I called Walmart. I didn't tell them I had my package. I was told the FedEx truck had a flat tire and my package would be delivered the next day.

According to FedEx tracking my package is still on the local truck over a week later.
at May 15, 2020

Your Opinion Is Based On What?